Okay so this was the brainchild of using up some leftovers that turned out in my favor. I made these last weekend to eat while we watched the Sooners play. So I think of them as football food. They would make a good appetizer, party food, or even a meal if you serve them with a side salad.

These babies and I started off rocky. After I got the filling made, which was easy, I tried to first fry them. They kept falling apart. I got frustrated and ended up baking a pan full. But while I was waiting for the oven to preheat I got the hang of frying them. I know, I’m a mess.

It turned out okay though because we ended up with half fried and half baked and were able to compare them side by side. Both were good. Both were good leftover. As you’d expect, the fried ones were crispier but more oily. The oven baked didn’t satisfy your junk food fix as well. They still tasted great and left you feeling better an hour later. It just comes down to personal preference really.

The trick to frying or baking these it handle gently and slowing place in the the baking or frying pan seam side down. When frying be sure to leave them alone long enough for the tortilla to harden so the filling doesn’t fall out. 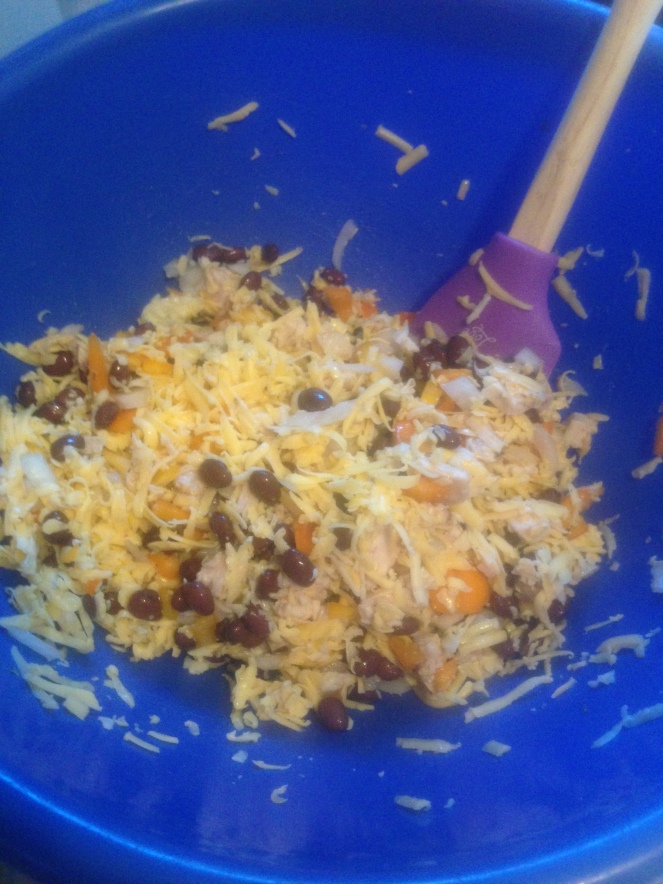 1 can black beans, drained and rinsed

1 1/2 cup shredded cheese (I used half cheddar half Monterrey Jack.)

Heat the tortillas in the microwave wrapped in damp paper towels for about 20 seconds to prevent them from cracking.

For baking, grease a pan and preheat oven to 350. If frying, heat oil in skillet over medium heat.

Spoon about 3 tablespoons of filling in each tortilla and place seam side down in the baking pan or heated oil.

For baking, cook the taquitos for 25 minutes. For frying, cook each taquito for 2-3 minutes on each side or until golden brown.

Serve with any desired dips and toppings, like salsa, sour cream, or guacamole.

10 thoughts on “Chicken Veggie Taquitos – Perfect for your weekend football viewing or just because.”